The Coins for Alzheimer’s Research Trust Committee (C.A.R.T.) will promote Alzheimer’s Awareness and collect change and small bills from members on a weekly basis.

The Genesis of CART

In October 1995, the Sumter, S. C. Rotary Club, led by Roger Ackerman and Dr. Jack Bevan, initiated the effort to prove that Rotarians voluntarily emptying their pockets of change for a good cause could produce significant levels of funds to support Alzheimer’s disease research. The CART Fund (Coins for Alzheimer’s Research Trust) was the name given to the project, which proved to be highly successful during an 8-month testing period.

In May 1996, The CART Fund was introduced at the Rotary District 7770 Conference and was enthusiastically received. The District leaders agreed to adopt CART as a project, if a committee made up of Sumter Rotarians could obtain the support of the individual clubs in the District. During the 1996-97 Rotary year, CART programs were presented in 62 of the 68 clubs in D-7770. The response was overwhelmingly in support of this grassroots project and the district officially adopted CART as a district-wide program in 1997.

The Concept of CART Grows!

The CART Fund was developed with the idea of accomplishing its goals without conducting fund raising projects and without interfering with other projects of Rotary clubs. In order to do this, CART leaders developed the concept of asking Rotarians to voluntarily empty their pockets of change or whatever amount they wanted to donate when they attend their weekly meetings. (It is estimated that on any given day in America, $8.25 billion in loose change passes among our citizens.) This provides a very simple, painless and effective way to raise much-needed funds for Alzheimer’s research.

However, as time has passed, numerous clubs have contributed a portion or even all of some of the proceeds of club fundraisers to CART. Many Rotarians contribute dollars as well as pocket change. Quite a number of clubs have members make challenge gifts on a monthly or quarterly basis. These can amount to $100 to $500 challenges. A Macon, Georgia Rotarian on two occasions made $5000 challenges covering a 4-month period and the Macon Rotarians met the challenge each time!

Many individuals who are not members of Rotary have made significant contributions to CART. In fact, the single largest contribution to CART was made by a non-Rotarian from western North Carolina who contributed $25,000 in honor of her two sisters who had lost their battle with Alzheimer’s disease. She said she chose CART because she liked the idea that 100% of her donation was going to research, and because she knew that Rotary was an outstanding organization. Memorials and honorariums have also been a source of funds for CART. Numerous individuals have named CART as the charity of choice for memorials honoring loved ones.

In early January 1999, the American Federation for Aging Research (AFAR) very generously agreed to provide their expertise in assisting with the grant process. Their valued assistance has continued primarily by recruiting some of the nation’s top scientists in the field of Alzheimer’s disease research to serve as a peer advisory group to review all grant applications.

The first Board of Directors meeting was held in November 2000. By-laws were adopted, and PDG Bill Clark of D-7750 was elected President of the Board.

The President of CART may call special meetings of the Board, but most of the decisions are made at the annual meeting held each year in Columbia, SC on the Tuesday prior to Mother’s Day. All other decisions are usually made using conference calls among the Executive Committee members. Each district that joins the CART program has two representatives on the board and two votes. The District CART Chair has one vote and the District Governor-nominee has one vote. All funds are deposited into one CART bank account.

In selecting the best possible recipients for each of our grants, the CART Fund has been fortunate to have the guidance of a 3-person advisory team of renowned Alzheimer’s research scientists who have contributed their valuable time.

Following founder Roger Ackerman, who chaired the first Grants Committee, Dr. Jack Bass served as Chairman of the CART Grants Committee for seven years, and in 2008, Dr. Jim Puryear carried on this great tradition with distinction. Dr. Gary Goforth took over this important task in 2018.

Dr. Sam Gandy served as Chairman of the CART Grants Advisory Team during the time that the first 6 grants were selected for funding by CART. Among the professional researchers serving at various times with Dr. Gandy were Drs. Virginia Lee, Edward Koo, David Holtzman, and George Martin. CART is deeply grateful to these dedicated scientists and volunteers for their guidance and encouragement.

The Rotary Club of Lenoir and CART

The Rotary Club of Lenoir was 1st in per capita giving in the District and 1st in overall giving to the C.A.R.T. Fund. 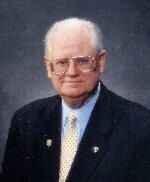 Chuck has served as:

Chuck's Particiaption includes but is not limited to: